Now you see it, now you don’t…

When it comes to packaging design, providing physical protection, information/marketing messages and security are undeniably important. But sometimes package design focuses on other factors that are just as important - such as sustainability. For example, Tide recently designed a package for its detergent pods which disappears as detergent pods are torn off one-by-one until there is no packaging left (shown below) - while Nivea developed a water-soluble soap box designed to be taken into the shower and dissolve completely when it encounters water. While our packaging doesn’t disappear or become part of the product, we also look at other factors beyond physical protection, information/marketing messages or security when it comes to package design. 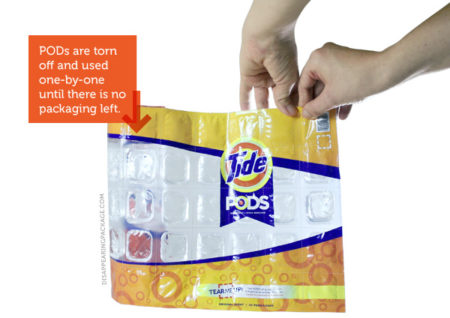 For example, in addition to considering how to safely get a particular product in our packages from point A to point B, we often also consider what happens before Point A, before the package is ready to ship. And when it comes to medical packaging, this consideration can be almost as important as product delivery. More specifically, medical device packaging needs to be meet certain standards, such as sterility levels or validation requirements.

Take for example the package we developed for a global leader in blood management, blood safety, therapeutic aphaeresis, cell therapy and cell collections for an automated blood collection system. It was essential that the tray was designed to be used in the part of the packaging process where the syringe is loaded into the trays and that the trays were validated via the IQ OQ PQ process validation. By doing so, we could ensure that the forming, sealing and assembly of sterile barrier system could meet ISO 11607-2 requirements for IQ OQ PQ validation.

To accomplish this, we partnered Curt Larsen and John Spitzley of Spartan Design Group, who served on the Working Group 7 Packaging, of ISO Technical Committee 198 to develop the first as well as the 2006 version of both parts of the ISO 11607 standards. This helped us build a strong base plan for IQ OQ PQ validation (see below) and helped us make IQ, OQ and PQ recommendations and custom plans for this and other medical packaging customers.

What about you? What are some examples your package design that have unique specifications?